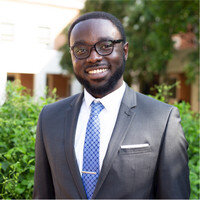 Adrian Armoo is a law clerk at Bryant Rabbino LLP awaiting admission in New York. Adrian assists with the Capital Markets and Finance and Mergers and Acquisitions practice groups of the firm.

Prior to joining Bryant Rabbino LLP, Adrian interned with DLA Piper and worked as a law clerk for Maizes and Maizes, LLP and Manhattan Legal Services. In addition, he also worked as a legal adviser at the Huddersfield University Legal Clinic in Huddersfield, United Kingdom, and a team leader fundraiser with the British Heart Foundation in Leeds, United Kingdom.

Adrian earned his Masters (LL.M) Degree at Wake Forest University School of Law in 2019 and gained his LLB (Hons.) Bachelor of Laws from The University of Huddersfield Law School in Huddersfield, United Kingdom, in 2018. He was also an executive member of the student government at each of the law schools he attended.